If you’re looking for things to do in Branson, Missouri, the museums (along with the shows) are some of the best attractions in town! Be sure to visit the Veterans Memorial Museum and also the Branson Dinosaur Museum. Branson’s Veterans Memorial Museum is located on W. Hwy 76 as you enter from the east off of US 65. The Dinosaur Museum is located on the west end of Hwy 76, right behind another awesome museum – the World’s Largest Toy Museum and across the street from the amazing attraction, Bigfoot Fun Park. 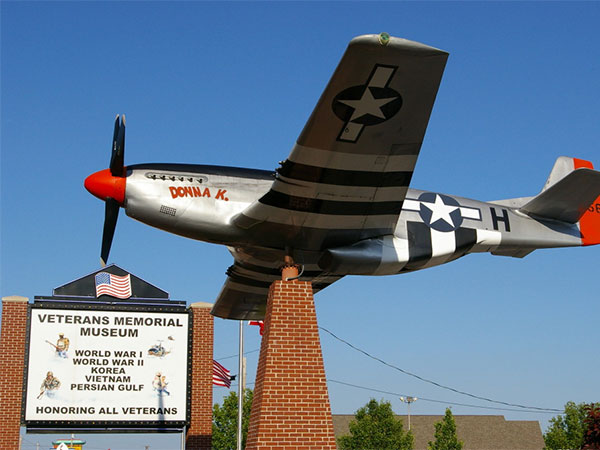 Over 2000 exhibits progressing through the wars of the 20th Century. A full-size P-51 Mustang fighter outside the museum marks the location of ones of Branson’s most poignant destinations.

ShowsInBranson – The official website for the League of Branson Theatre Owners & Show Producers where visitors can purchase their show tickets, attraction admissions, museum passes, and more. Learn about upcoming events and the different Branson shows, Branson attractions, things to do in Branson, restaurants, shopping, and more.

Yakov Smirnoff See Yakov Smirnoff’s Branson, Missouri Show. Yakov, the famous Russian Comedian says it’s time to Make America Laugh Again – and he’s not “Putin” you on! Yakov takes you on a comedic journey packed with tall tales and witty perceptions, funny facts and huge laughs. Only in America can you see Yakov go from Red to Redneck, serenade Lady Liberty, deliver patriotic comedy & more! What A Country! What A Show!

Hughes Music Show – Branson’s #1 Show for great MUSIC features the Hughes Family, the largest live on-stage performing family in the world, all Born to Entertain! Over 50 amazing singers, dancers, and musicians present brilliant choreography, world-class production, sensational lighting, outstanding sound, lighthearted humor, and family fun. From Country to Broadway to Pop to comedy to Patriotic to Gospel to rock-n-roll, the Hughes Music Show is everything you want to experience in a Branson show…and more. After you’ve seen the Hughes Music Show, you’ll want to see the other shows located at the Hughes Brothers Theatre – the new show Re-Vibe is taking Branson by storm, the Hughes Brothers Country Dinner Show includes a delicious barbeque meal, Oh Happy Day-Going Back to Gospel, and in November and December the Hughes Brothers Christmas Show.

Shipwrecked Treasure Museum – An interactive museum filled with priceless treasures, artifacts, and pirate booty. The artifacts on display were recovered from different historic ships, including: The famous Civil War ship, SS Republic, with the largest Civil War treasure ever found. The British WWII warship, SS Gairsoppa, sunk by German Submarine in over 15,000 ft deep water (over 90,000 pounds of silver was recovered). The Spanish Galleon, Tortugas, sunk in the 1600’s. And many, many more. The museum highlights the discoveries & painstaking documentation of shipwrecks & recoveries of artifacts & treasure by Odyssey Marine Exploration as seen on National Geographic & Discovery Channels. Seafaring lore abounds, especially about pirates & their fates. Try your hand at recovering coins from the ocean floor, immerse yourself in a Level One Hurricase, interact with actual 3D map of SS Republic at bottom of the ocean, test your knot tying skills, & more.

Buck Trent is a two-time CMA Instrumentalist of the Year. The inventor of the electric banjo, Buck is credited with creating the “Porter Wagoner sound”.  His performances on Dolly Parton’s “I Will Always Love You” and “Jolene” are legendary. A featured performer on the Porter Wagoner Show, Hee Haw, and other television shows, Buck has also recently been on the Marty Stuart Show, Country Reunion, and others. He and Roy Clark were the first country music entertainers to tour the former USSR. Buck was the first nationally known star to perform a morning show in Branson. Currently Buck performs limited dates in Branson and does limited touring across the states. Also available at his website is the newly released album “Spartanburg Blues” with a powerhouse of legendary entertainers (including Dolly Parton, Vince Gill, Connie Smith, Marty Stuart, and more) performing 15 songs.

Acrobats of Branson present iCircus – is a fun show filled with amazing acrobats from all over the world. iCircus brings a literal cornucopia of talent, beauty, strength, and fun to the show in Branson, Mo. Branson’s Chinese Acrobats showcase a revolving line-up of human performance art. Throughout the year you might see Hoop-Diving, Daring Trapeze, thrilling aerial ballet, exotic spinning plates, bicycling, furry animal entertainment, and more in this fast-paced show. Fun for the whole family! See this show at the Branson Star Theatre where the rockin’ Nashville Roadhouse Live is performed.

Grand Country Music Hall – Home to 9 fantastic shows including the popular Branson Country USA TV & Radio Show. Mainstay of the Music Hall is Grand Jubilee featuring one of Branson’s Best Quartets, New South. Other shows include Down Home Country, Comedy Jamboree, Amazing Pets, and more. While seeing a show at Grand Country Music Hall be sure to dine at the buffet, take in a game of miniature golf, and enjoy other attractions and restaurants on property.

Hot Winter Fun Big Show – 28th Anniversary of the Hot Winter Fun Big Show will be at Dick Clark’s American Bandstand Theatre. Date and time to be announced soon. Packed with Branson’s favorite shows performing on stage. Once the date is announced tickets may be purchased by calling 417-339-3003. Click here to learn more about the Big Show and which performers are scheduled to appear.

Ozark Mountain Christmas – In November and December Branson celebrates the reason for the season! The whole town lights up with the sights and sounds of Christmas. Shows present special Christmas productions, there are numerous lighting displays, attractions are open with special twists for the Christmas season, and Silver Dollar City creates a whole new themed adventure. Along with plenty of excellent shopping, Branson offers a special holiday spirit that warms the heart.

Chateau On The Lake

The League of Branson Theatre Owners & Show Producers. An organization consisting of Shows, Theaters, Attractions, Museums, Restaurants, Retail Outlets, Media, and others dedicated to assisting and encouraging the well-being of the tourism industry and in particular the Branson brand as the “Live Music Show Capital of the World”.

ExploreBranson.com A Branson website sponsored by the City of Branson with official vacation information provided by businesses throughout the Ozarks.

State of the Ozarks is an online publication dedicated to celebrating and preserving Ozark culture!

Send us an email and we'll get back to you, asap.